The evolution of immune memory up to the 8th month

The duration of immune memory after SARS-CoV-2 infection remains uncertain. Since this virus emerged only recently, there are no existing studies on long-term immunity. Immune memory comes from  B lymphocytes and T lymphocytes  (memory B and T cells) and antibodies specifically directed against the pathogen. Effective long-term protection does not necessarily involve a strong response by neutralizing antibodies, but may require a B or T-memory cell response with few antibodies in circulation. It is therefore necessary to analyze all the elements involved in immune memory and not just measure antibodies specific to the virus.

But how does the immune response evolve overall? Researchers in New York and California have measured levels of antibodies, B and T CD4 helper cells and T CD8 (cytotoxics) directed specifically against SARS-CoV-2, in patients who have recovered from COVID-19, up to 8 months after their infection. This study involved 254 blood samples from 188 infected individuals (80 men and 108 women), of which 43 samples were taken 6 to 8 months after infection.

Levels of antibodies were determined using ELISA testing. The first observation was that levels of IgGs directed against the spike (S) protein remains relatively stable up to 8 months, with only a slight decline. Nevertheless, this level varies according to individuals. As regards the IgAs, after a short fall in the 1st month,  levels stabilize for up to 8 months. Between 6 and 8 months after infection, 90% of individuals possess neutralizing antibodies targeting SARS-CoV-2.

Concerning the T-memory lymphocytes, there exist CD4 cells called helpers that enable the activation of other composite parts of the immune system, and CD8 cells, called cytotoxics, that allow the elimination of infected cells. The levels of different lymphocytes was analysed using flow cytometry, after fluorescence marking. Levels of CD4 and CD8 decline over 8 months. 70% of individuals possess T CD8 cells 1 month after infection but the proportion decreases to 50% at 8 months after infection. 93% of individuals possess T CD4 cells one month after infection and this proportion decreases only slightly after 8 months. 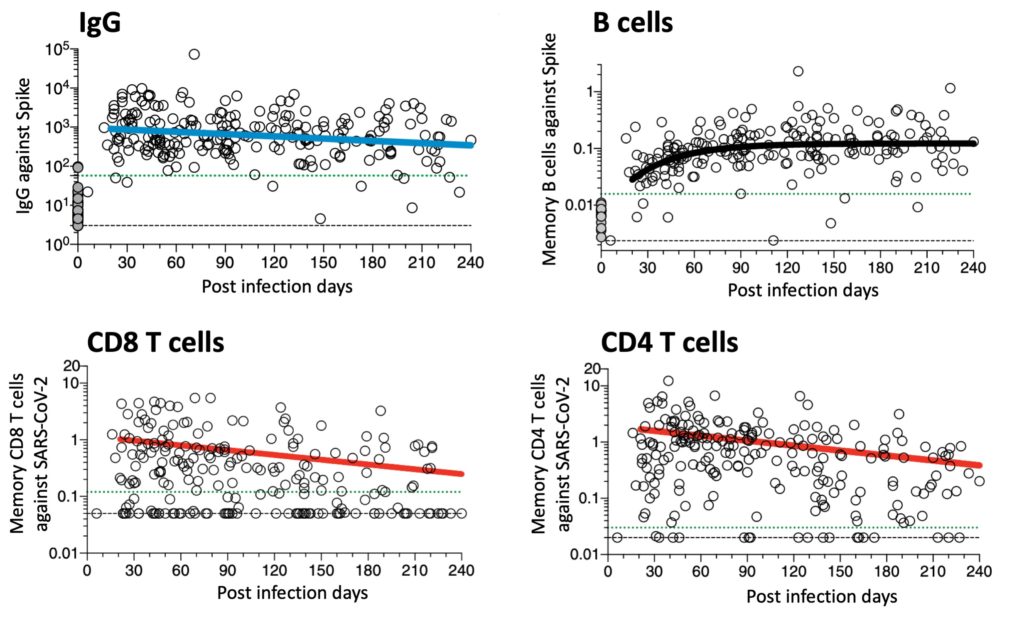 Immune memory against SARS-CoV-2 is made up by different elements of the immune system joining together. The level of IgGs targeting the S protein is higher in men than in women. However, there are no differences regarding B or T memory cells. Regarding severe cases of the illness, levels of antibodies and B memory cells are higher in hospitalized patients. On the other hand, levels of T CD8 cells are comparable to levels in non- hospitalized patients, while levels of T CD4s are lower. These results concur with previous studies which indicated that severe cases show a strong antibody response, but a relatively weak T cell response.

However it is necessary to treat these conclusions with a certain amount of caution. Firstly, the number of samples per patient was limited. At least 3 samples would be required for a precise analysis. In addition, only those memory cells in circulation were analysed. It is possible that local immune memory (within the respiratory mucous membranes) plays an important role in protection against SARS-CoV-2. Finally, 95% of infected patients possess immune memory 6 months after infection. A simple serological antibody test does not always give a clear picture of immune memory since it does not involve other elements such as B and T lymphocytes.

Jennifer M. Dan and coll. Immunological memory to SARS-CoV-2 assessed for up to 8 months after infection. Science, February 5 2021.