The complexities of the mRNA vaccines antibody response

Immune response following infection by SARS-CoV-2 has now been well documented. However, responses following vaccination, in particular with mRNA vaccines (Pfizer-BioNTech and Moderna) has been less well studied, since these vaccines have only been available since the end of 2020. The principal target of the antibodies is the RBD (Receptor Binding Domain) of the spike protein which interacts directly with the ACE2 cellular receptor to enable the virus to enter the cell. But other epitopes (regions targeted by the antibodies) exist, notably the NTD (N-Terminal Domain). American researchers at the School of Medicine at Mount Sinai, New York and the Washington University School of Medicine in Saint Louis have recently shown the importance of those antibodies targeting the NTD in vaccinated people (mRNA vaccines).

The researchers took blood samples from 6 individuals who had been vaccinated at the end of 2020 at different times following vaccination. They analysed the anti-SARS-CoV-2 antibody response in these patients and compared it to that of individuals who had been naturally infected by the virus. They noted first of all that the level of anti-spike antibodies was higher in the vaccinated patients. However, the proportion of neutralising antibodies in this group was lower, with the majority of their antibodies being non-neutralising. They then showed that the NTD is, like the RBD, an important target for antibodies resulting from vaccination. They observed that the vaccine also enabled an antibody response against 2 seasonal coronaviruses.

The scientists then evaluated the efficacy of the antibodies resulting from the vaccine against certain spike protein mutations, such as the N501Y and the E484K mutations, found in variants of concern such as the ⍺ (UK or B.1.1.7variant); the β (South African or B1.351variant); the ɣ (Brazilian or P.1 variant) and the δ (Indian or 1.617 variant). The antibodies targeting the RBD are effective against the N501Y mutation, but not against the E484K mutation, unlike those antibodies targeting the NTD, which are effective in both cases.

This study therefore points to the importance of studying antibody responses in order to optimise vaccines against these new variants. 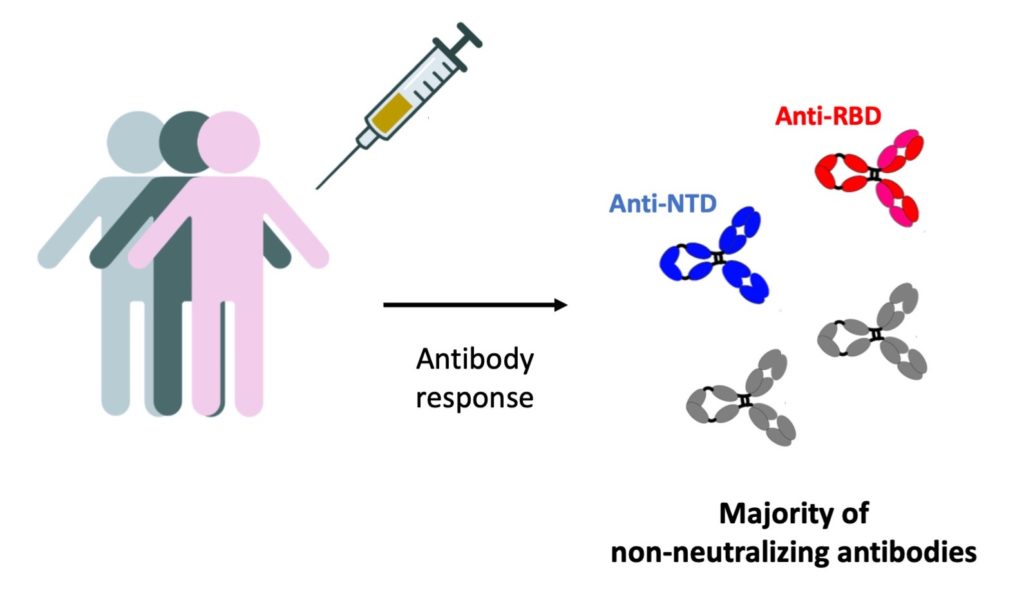