TEMPOL, a powerful oxidant against COVID-19

Like all viruses, SARS-CoV-2 reproduces so as to spread its genetic material. During its replication cycle, certain non-structural proteins (nsp7, 8, 12) assemble to form the viral polymerase (RNA-dependent RNA polymerase, RdRp) that enables the transcription and the replication of the viral genome. It interacts with another viral protein, the helicase nsp13, located upstream, which “opens” the genetic material to prepare for its replication. In general, the architecture of these enzymes is maintained by the presence of non-organic cofactors (metal ions).

While we already know about some of these cofactors, American researchers at the National Institute of Health (NIH) investigated SARS-CoV-2 proteins to see which could incorporate the chemical compound iron sulphide (Fe-S). To do this, they used a predictive model based on protein sequences. In the protein nsp12, an active RdRp site, they discovered two LYR (leucine-arginine-tyrosine) sites and showed in vitro that they are necessary for interaction with the chaperone protein HSC20, involved in the cellular metabolism of Fe-S. In the cells, this interaction is transitory and necessitates the intervention of other proteins (HSPA9, ISCU, NFS1, CIA) to enable the RdRp to mobilise the iron.

Structural and bio-chemical approaches then showed that the polymerase houses Fe-S aggregates; one, coordinated by C487-H642-C645-C646 (cluster II) at the catalytic site of the enzyme, and another by the interface motif H295-C301-C306-C310 (cluster I).

Functional approaches show that cluster II is essential to the enzymatic activity of the RdRp, while cluster 1 enables its interaction with the helicase. Unlike in previous studies, the researchers worked in anaerobic conditions (absence of oxygen) so as not to oxidise the Fe-S clusters. In aerobic conditions (presence of oxygen), they degraded and were replaced by zinc.

The researchers then investigated the known oxidants. Amongst them, TEMPOL is very powerful (nitroxide) and causes the loss of both clusters as well as the catalytic activity of purified RdRp. The researchers showed that TEMPOL does not affect the respiratory metabolism of the cells or the interaction of the RdRp with the intracellular Fe-S. In addition, it is not dangerously toxic for the cells. Amongst the oxidants having a similar effect, TEMPOL is the most powerful and can block the RdRp activity in synergy with Remdesivir, an antiviral molecule (nucleoside analogue) used in COVID-19 treatment. Finally, TEMPOL proved to be very effective in blocking in vitro viral infection (in the Wuhan strain).

This study provides structural and functional bases which point the way to the exploration of a new path, that of nitroxides, and in particular TEMPOL, in the treatment of COVID-19. 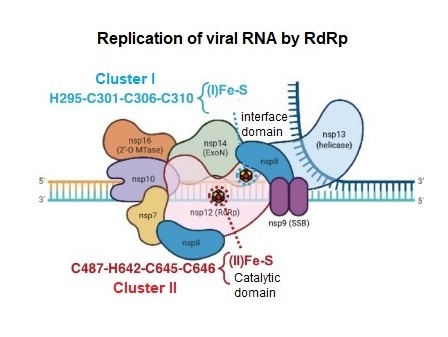