SARS-CoV-2 is responsible for more than 50 million infections worldwide, and more than a million deaths. Studies on how COVID-19 is transmitted have shown the significance of infection clusters, generally gatherings of people in enclosed spaces such as offices, churches or health care facilities. These clusters sometimes involve a superspreader event, where one individual transmits the virus to a larger number of other people. These super-spreaders are recognised as having an important role in the epidemic’s spreading.

However, the exact circumstances surrounding these events and their impact on the epidemic have been little studied. Viral genome sequencing data from infected individuals involved in these superspreader events and phylogenetic analysis of these sequences marks them apart from simple intense transmission at a local level, during which several separate individuals are responsible for the virus impacting the community.

Hospital and university researchers in Boston carried out phylogenetic analysis of 772 SARS-CoV-2 genomes from infections in the Boston region during the 1st wave of the pandemic, between March and May 2020. The viral genomes were sequenced from naso-pharyngeal swabs. This analysis allowed the construction of “phylogenetic trees” based on mutations in viral genomes. The closer the genomes, the closer they will be in the phylogenetic tree. Researchers were thus able to determine the origins of the ancestral viruses responsible for the spread.

The first observation is that a minority of viral imports could be responsible for a majority of infections: 29% of virus introductions in the Boston area are thought to be responsible for 85% of infections. Certain mutations allow virus transmission groups to be tracked: for example, the C2416T mutation was the first in the Boston region, appearing on the 14th of February 2020. Other mutations, such as G3892T or C20099T, appeared between March and the beginning of April 2020.

These 2 superspreader events were analyzed. The first occurred in a retirement home where multiple cases of infections were detected within a short period. 85% of residents and staff tested positive for SARS-CoV-2 and 83 viral genomes were able to be sequenced. A key mutation (G38922T) was common to infected individuals in the retirement home, suggesting a superspreader event. This type of virus transmission in such institutions, where large numbers of at-risk individuals live together, may have a serious impact on mortality rates.

The second event took place at a business conference in Boston on the 26th and 27th of February 2020, resulting in spreading at local and international levels. Around a hundred people may have been infected and 28 viral genomes were able to be sequenced. All carried the C2416T mutation. The superspreader responsible for this cluster may have been a European participant at the conference, since this mutation-signature was found in Europe during the same period. The mutation then spread within the United States; it was detected in 29 states and represented 1,9% of variants in the country on the 1st November 2020. This superspreader event was responsible for 50 000 infections in the States. However, it must be noted that not all clusters are the result of a superspreader event, but sometimes occur because of rapid spreading within a community following multiple entries of the virus. 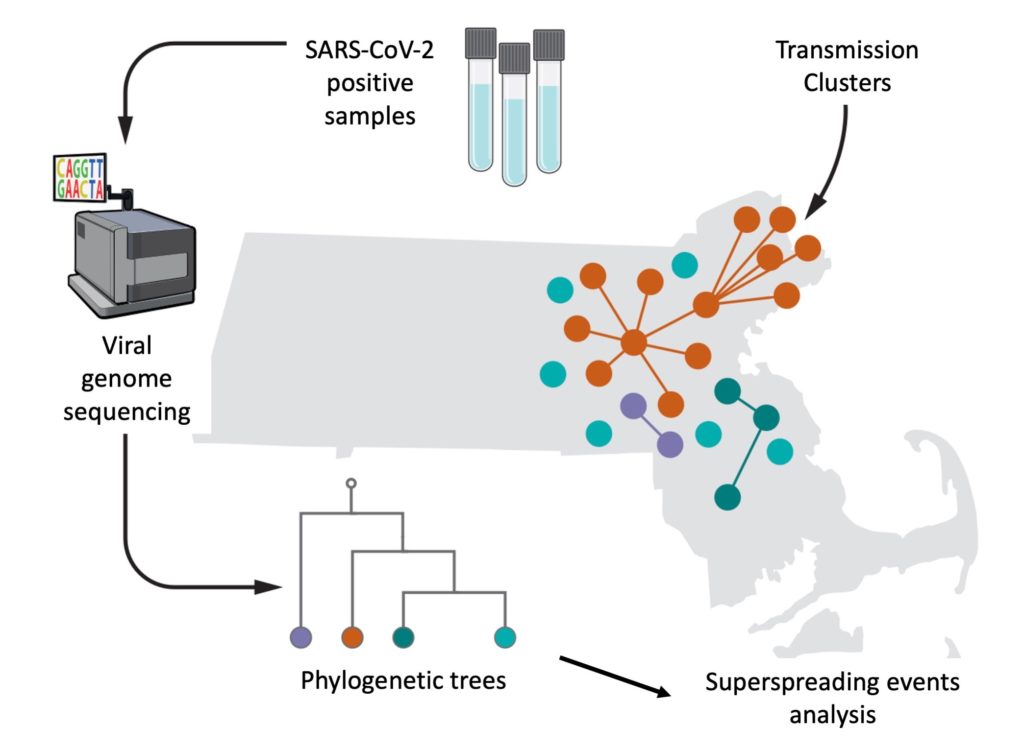 It is clear therefore that introduction of the virus in this type of unfortunate circumstance can have devastating effects. These results also show that genome analysis helps with investigation into transmission clusters.