SOS Amitié and other telephone help-lines: a barometer of mental health during the COVID-19 crisis?

The state of mental health in a population is difficult to measure. However, it is a significant parameter in times of crisis. But since it is difficult to identify, it tends to be neglected in favour of more easily quantifiable aspects of behaviour. However, Swiss and German researchers did analyse the mental health of the population during the COVID-19 crisis, by establishing links with waves of infection and the consequent sanitary measures.

The researchers used data from telephone help-lines by analysing 8 million calls from 23 platforms in 14 European countries, the United States, China, Hong Kong, Israel and Lebanon between 2019 and the beginning of 2021.These services, such as SOS Amitié in France, aim to help with mental health and prevent suicides. They provide a listening service and the possibility of immediate help, and are anonymous and easily contactable.

The scientists’ first observation was that the number of calls increased during the epidemic, with the peak attained after 6 weeks. Afterwards, levels reduced gradually, but remained higher than before the crisis. It should be noted that these figures are limited by the platforms’ technical limitations, since unanswered calls were not taken into account. The main reasons for people calling before the pandemic were to do with couple relationships, loneliness and various other fears and anxieties. Analysis shows that the nature of calls changed during the 1st wave of the epidemic: calls relating to fears and anxiety, including the fear of infection by SARS-CoV-2, increased substantially, as did calls concerning loneliness, while people called less about couple relationships, financial problems and domestic abuse. However, other factors may influence types of calls: it is, for example, difficult to call about domestic abuse if you are in lockdown.

How did the nature of calls evolve afterwards? Numbers increased again after the summer of 2020, corresponding to the epidemic’s resurgence and more severe sanitary restrictions. Scientists established a clear link with this latter element. However, the implementation of financial support measures brought about a reduction in calls on money problems.

In conclusion, in the context of a health crisis, measures implemented by the authorities may exacerbate unhappiness, mental illness and the number of suicides. It is important to be able to measure the mental health of a population. The authors of this study show that data from telephone help-lines can be a useful indicator, but cannot entirely replace other resources such as clinical data. 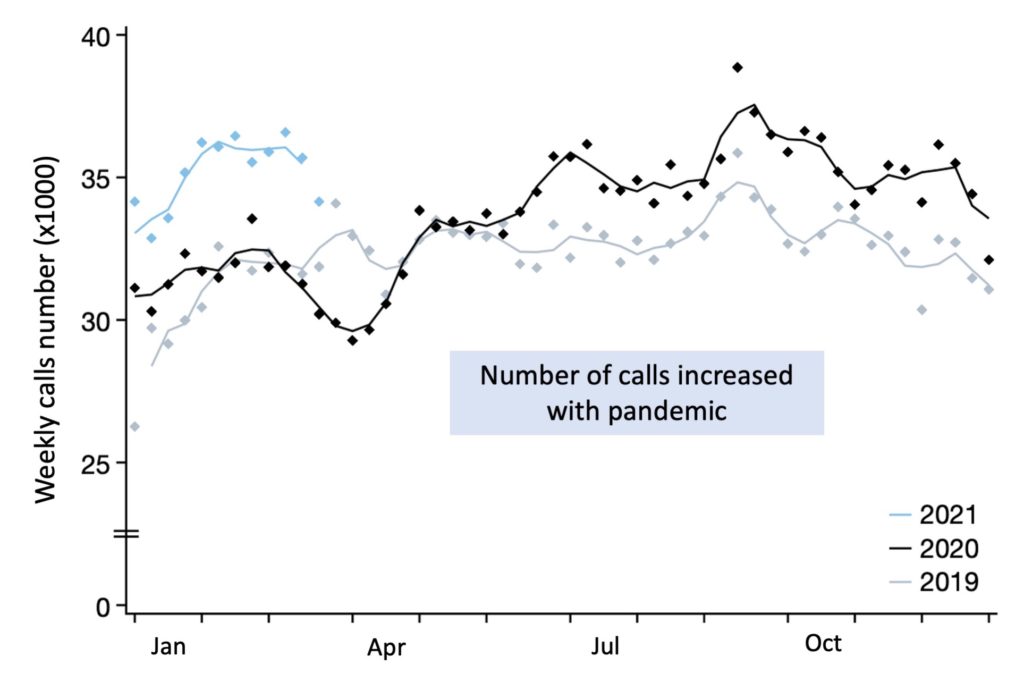