Some antibodies could block the fusion of infected cells

The first stages of infection by SARS-CoV-2 involve the interaction of the spike with the ACE2 cellular receptor followed by the fusion of the viral membrane with the plasma membrane of the cell. The S1 domain of the spike governs the interaction with the ACE2 through its RBD (Receptor Binding Domain) and undergoes several structural changes as well as an enzyme cut. The S2 domain is thus able to take hold in the cellular membrane and induce the fusion. In addition, the infected cells express the spike protein on their surface, which causes membrane fusion with neighbouring cells. This second part of the spike-ACE2 interaction culminates in the formation of syncitia (multi-nucleate giant cells) linked with several types of lung damage in severe cases of COVID-19. The standard treatment involves the use of neutralizing antibodies that generally block the spike-ACE2 interaction by targeting the RBD.

A team of scientists at the University of San Francisco have produced neutralizing antibodies in vitro from genetic samples taken from 22 patients who had never contracted COVID-19. This approach gives a different type of antibody from those derived from infected patients, which is the source usually studied. 6 antibodies were chosen for their effectiveness from among billions of possible candidates to block the RBD-ACE2 interaction. Despite this common capability, these antibodies have variable neutralization powers in vitro. If the bivalence of the antibodies is suppressed (Fab monomeric), the antibodies lose the ability to neutralize, showing that they absolutely need to recognize two sites. For example, the 3D11 antibody shows the strongest capacity for liaison with the spike protein (affinity) but the weakest neutralization capacity. The most powerful antibody (5A6) can reduce viral replication by up to 10 000 times and maintains the integrity of the epithelium. Like 3D11, it fixes itself to the viral surface at a greater density. The other antibodies have intermediate properties.

With an in vitro system evaluating the capacity of cells expressing the spike protein to fusion with other cells, the researchers showed that the 5A6 antibody blocks the formation of syncitia, while the 3D11 antibody increases it. The other antibodies had no effect on this mechanism. Using cryo-electron microscopy, the researchers determined that the 2H4 antibody mimics ACE2 binding and causes the same structural changes in the spike as in the presence of the receptor (known as an orthosteric mechanism), which blocks fixation by ACE2 but allows fusion to occur. 3D11 does not target the ACE2 fixation area (allosteric mechanism), but stabilizes the spike’s final form (exposed S2 and open RBD), increasing fusion. 5A6 has a quaternary and cooperative fixation mode that keeps the RBD in the closed position, blocking the ACE2 fixation and stabilizing the spike in its pre-fusion form. This double feature enables it to inhibit not only infection, but also cell-cell fusion.

Although the 6 antibodies interact strongly with the spike’s RBD (high affinity), they all have a different bioactivity with respect to spike-ACE2 interaction and fusion. The effectiveness of a neutralizing antibody results from complex multi-factorial mechanisms and not simply from competition with the ACE2 for binding with the spike. 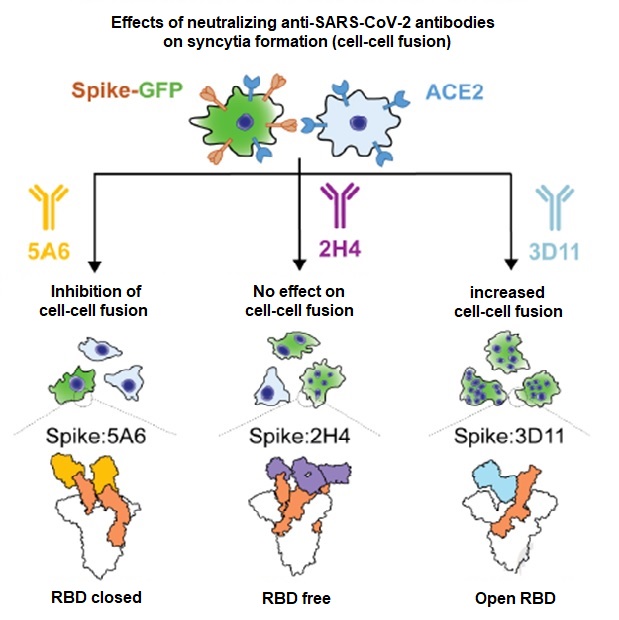 Could these discoveries be useful in treatment?

Yes, if it is understood that stabilising a particular conformation of the spike protein has significant implications for pathology and immunity. An antibody such as 5A6 could be very useful in the treatment of severe, advanced cases of COVID-19, where pulmonary syncitia are observed. Its mode of action is similar to that of the drug Palivizumab, used in cases of infection by the Respiratory Syncitial Virus (RSV). The methodology described here allows evaluation of how antibodies bind to the spike and the consequences thereof.