Omicron is resistant to antibodies

SARS-CoV-2 is an RNA virus. However, the enzyme responsible for replication of the virus genome to create new viral particles, polymerase, commits many errors. These mutations may persist if they endow the virus with an advantage. When a certain number of mutations accumulate, the virus becomes a variant, meaning a virus which is very close to the original strain but containing one-off mutations in its genome, or deletions (loss of nucleotides), or insertions (addition of nucleotides). The proteins made from the genome (which contains the blueprints) are therefore slightly different from those of the original strain and have different properties. In this way, viruses can become more transmissible or more resistant to neutralisation by antibodies created by prior infection with another variant, or by vaccination.

In the case of SARS-CoV-2, different variants have emerged since the beginning of the pandemic. Some have become dominant worldwide, such as the Alpha (UK) or Delta (Indian) variants. Others have caused localised epidemics in certain countries, such as the Beta (South African) or Gamma (Brazilian) variants. At the end of November 2021, the Omicron variant emerged and has become dominant across the world in a matter of weeks. Because of its high number of mutations, the risk of the variant escaping antibodies is severe. In this study, British researchers (at Oxford University) analysed the Omicron variant’s resistance to neutralisation by antibodies.

The researchers carried out in vitro neutralisation tests using serum (which contains antibodies) from individuals who had been previously infected or were vaccinated. The vaccinated individuals had received 3 doses of either AstraZeneca or Pfizer-BioNTech developed from the spike protein of the original Wuhan strain. The aim was to discover if the antibodies targeting the original strain were also effective against the Omicron variant.

The scientists firstly carried out neutralisation tests with the serum of patients having been infected by the original strain on different variants, including Omicron. Neutralisation of the variants was reduced significantly overall, especially in the case of the Omicron variant. This means that patients having been infected with the original strain are less well protected against the variants that have emerged.

The researchers then carried out neutralisation tests with serum from patients who had been infected by the Delta variant, or infected and vaccinated (before or after their infection). They observed that having been infected and vaccinated does enable increased neutralisation of the Omicron variant. The scientists also compared the efficacy of 2 or 3 doses of vaccines against Omicron. It seems that neutralisation of this variant is reinforced after a 3rd dose. The researchers also tested neutralisation of Omicron by the main therapeutic antibodies currently available (synthetic antibodies developed by genetic engineering for the treatment of infection by SARS-CoV-2). The mutations present in Omicron significantly reduce the effect of these therapeutic antibodies.

The scientists also looked at the advantages conferred by the 3 known mutations in the RBD, present in the Alpha, Beta, Gamma and Delta variants, but found together for the 1st time in the Omicron variant (N501Y, E484K and S477N). The RBD is the region where the S protein interacts with the ACE2 cellular receptor to enable the entry of the virus into the cell. This trio of mutations seems to give the virus an advantage, which may partly explain its high transmissibility, even though its affinity with the ACE2 cellular receptor is not increased.

Finally, the researchers studied the structure of the S protein using cryo-electron microscopy. They noticed that the numerous mutations in the Omicron variant, as well as its deletions and insertions, cause a slight modification in the protein structure.

In conclusion, what is surprising in observing the Omicron variant is the large number of mutations, notably in the S protein, which is much higher than in other variants that have emerged until now. The way in which Omicron appeared is still under debate. This study seems to favour the theory of the variant’s evolution being enabled by antibody evasion, perhaps in an immunocompromised individual, but without any evolution towards greater affinity with the cellular receptor. The overall increase in immunity in the population, whether by natural infection or by vaccination, heightens the selection pressure in mutations, and may promote the appearance of variants. In Omicron, this has led to significant resistance to therapeutic antibodies and to antibodies in patients who were either infected by the original strain or vaccinated. Nevertheless, a 3rd dose of the vaccine does significantly increase protection, notably against severe forms of illness. 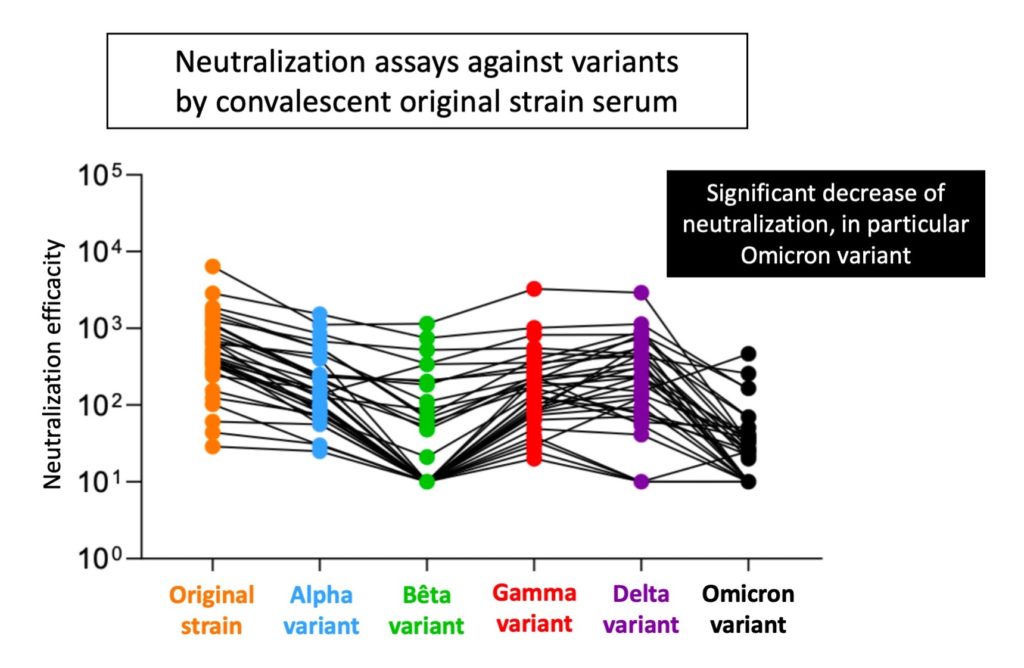