Masitinib: a new treatment against COVID-19?

When SARS-CoV-2 infects a cell, its genome enables the production of proteins that will be used to assemble new viral particles. The proteins are synthesised by the cellular machinery in the form of large polyproteins, cleaved by cellular and viral proteases. The viral proteases are a potentially useful target in the development of antiviral treatments since they are indispensable for the virus to be able to self-replicate.

However, developing such treatments is a very long process. Drug repositioning may therefore be a suitable alternative. This involves testing drugs already on the market to treat another pathology. American researchers (at the University of Chicago, the University of Louisiana and Duke University) have shown that Masitinib, a medicine given orally and prescribed in neurology for inflammatory and oncological diseases, is a powerful inhibitor of the main SARS-CoV-2 protease.

The researchers examined a library of more than 1,900 human drugs either approved or in clinical testing. They firstly tested the effectiveness of these medicines to block replication in cell culture of a coronavirus causing a cold in humans (OC43, which can be manipulated safely). The researchers thereby identified 108 molecules that enable infection to be reduced, keeping the 35 most powerful and removing those whose ineffectiveness against SARS-CoV-2 had been proven, along with those that had been removed from the market for safety issues. In the end, 26 remained, of which 20 inhibited SARS-CoV-2 replication. Amongst those, 8 targeted one of the viral proteases.

It must be noted that the most powerful, Masitinib, is also effective in vitro  against these variants: the Alpha (⍺) or UK, the Beta (β) or South African and the  Gamma (ɣ) or Brazilian.

Finally, the scientists evaluated the efficacy of Masitinib in vivo, on a mouse model infected by SARS-CoV-2. They showed that Masitinib enables the viral load and inflammation to be reduced, and life to be prolonged.

Thanks to drug repositioning, the researchers have been able to identify a molecule that appears to be effective against SARS-CoV-2 in mice in vitro and in vivo. Phase 2 clinical testing is being carried out to confirm the effectiveness of Masitinib against COVID-19 in humans. 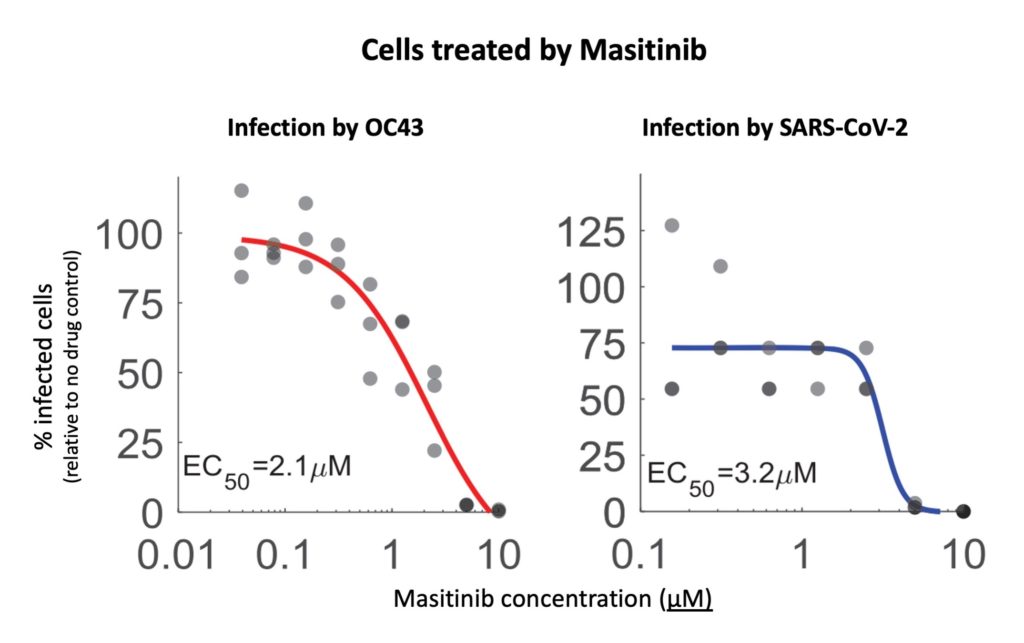