How did the virus spread in Africa?

The African continent represents less than 4% of worldwide cases and deaths linked to COVID-19. However, these figures are possibly an under-estimation, since the 2nd wave of the pandemic in January 2021 was much more widespread in numerous countries. The majority of these countries quickly put preventive health measures in place, notably concerning international travel and the imposition of lockdowns to limit the spread of the virus and give health services time to prepare. The first wave of the pandemic affected areas of the continent in different ways, with many cases reported in the north and the south, but few in other regions. An international study looked into the dynamics of SARS-CoV-2 infection in Africa.

The researchers undertook phylogenetic and phylogeographic analyses using genomic data from 33 African countries as well as Mayotte and the Reunion Island. They analysed 8 746 genomes in total, sequenced up to the end of March 2021, and noted more than 757 introductions of the virus onto the continent between the beginning of 2020 and February 2021. During the 1st phase of the epidemic, importations of the virus were principally from Europe, at 64%.

North African countries had the most virus introductions from Europe or Asia. Then the number of importations in other African countries increased as the pandemic progressed. South Africa appears to have been the major source of virus importations which then made their way into other countries on the continent. Africa also played its part in the propagation of the epidemic on a worldwide level with at least 324 cases of exportation towards other countries beyond the continent.

The researchers then carried out a study on the propagation of the Beta (South African) variant. This variant was sequenced for the 1st time in October 2020, but it seems that it may have emerged in about August 2020. It then spread across South Africa, then to other neighbouring countries (Mozambique and Botswana) in November 2020. In March 2021, this variant attainted dominance in South Africa, Mayotte and the Reunion Island.

So the first incursions of the virus onto the African continent came principally from Europe, and as the pandemic progressed, so the propagation of the virus over other African countries increased. Genomic surveillance is essential for early detection of the emergence of new variants, the likelihood of which is increased by the fact that vaccination on a continent-wide scale takes time. 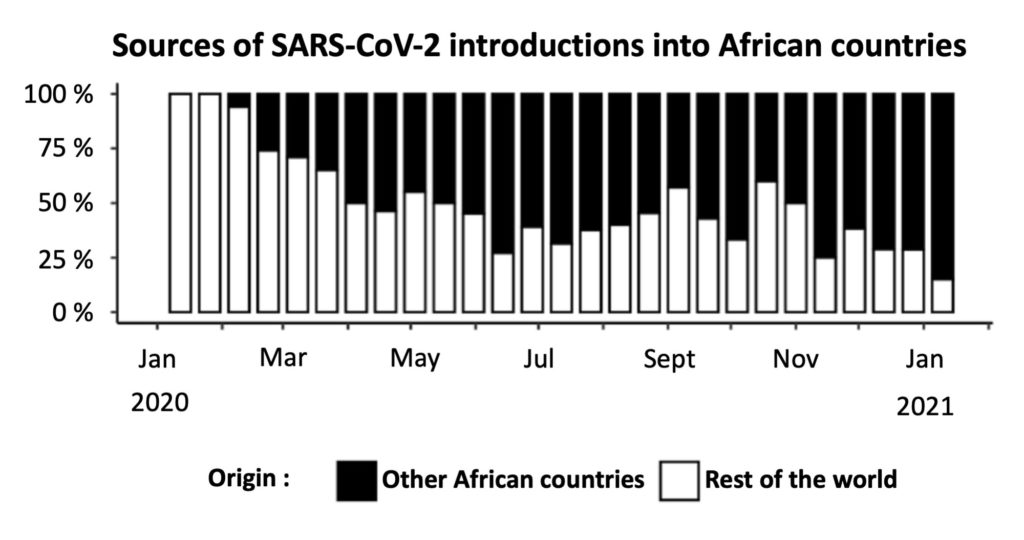 Eduan Wilkinson and coll. A year of genomic surveillance reveals how the SARS-CoV-2 pandemic unfolded in Africa. Science, 9 September 2021.