By the 9 th of June 2021, COVID-19 had officially caused more than 3,7 million deaths across the globe. The United States and Brazil alone represent 28% of deaths worldwide and 59% of deaths across North and South America. In these 2 countries, the number of deaths varies between states, depending on which public health precautions were applied, since any national coordination was almost non-existent.

In Brazil, the situation remains very difficult: in April 2021, 9 cities recorded more deaths than births. In addition, by the 25th of April, the number of deaths in 2021 had already exceeded the total for 2020. However, the country had previously seen an increase in life expectancy from 46 to 77 years between 1945 and 2000, an average increase of 5 months per year. American researchers at the School of Public Health, Boston, Princeton University have evaluated and analysed the decrease in life expectancy in Brazil in 2020 and during the first 4 months of 2021.

They started with the overall number of deaths from January 2020 to April 2021, according to gender, and throughout the whole of Brazil. They were thus able to calculate the life expectancy e0 of a new born child. This figure indicates the average number of years that a baby can expect to live if he/she is born in a particular year and is subject to the prevailing mortality rate of this year for the whole of his/her life. As an example, the Spanish flu epidemic in 1918 reduced life expectancy e0 in the United States by about 10 years. Since COVID-19 was more deadly for elderly people, the life expectancy e65 was also calculated, corresponding to the number of years that a 65 year old could expect to live on average.

The researchers thus estimated an average reduction in life expectancy e0 in Brazil between 2019 and 2020 of 1,31 years, a reduction that was more pronounced for boys (1,57 years) than for girls (0,95 years). Life expectancy e0 had therefore regressed as compared to 2014. The largest decrease was in the state of Amazonas, in the north of the country (3,46 years) while Rio Grande do Sul, in the south, was the only state to record an increase in life expectancy e0 (0,07 years). 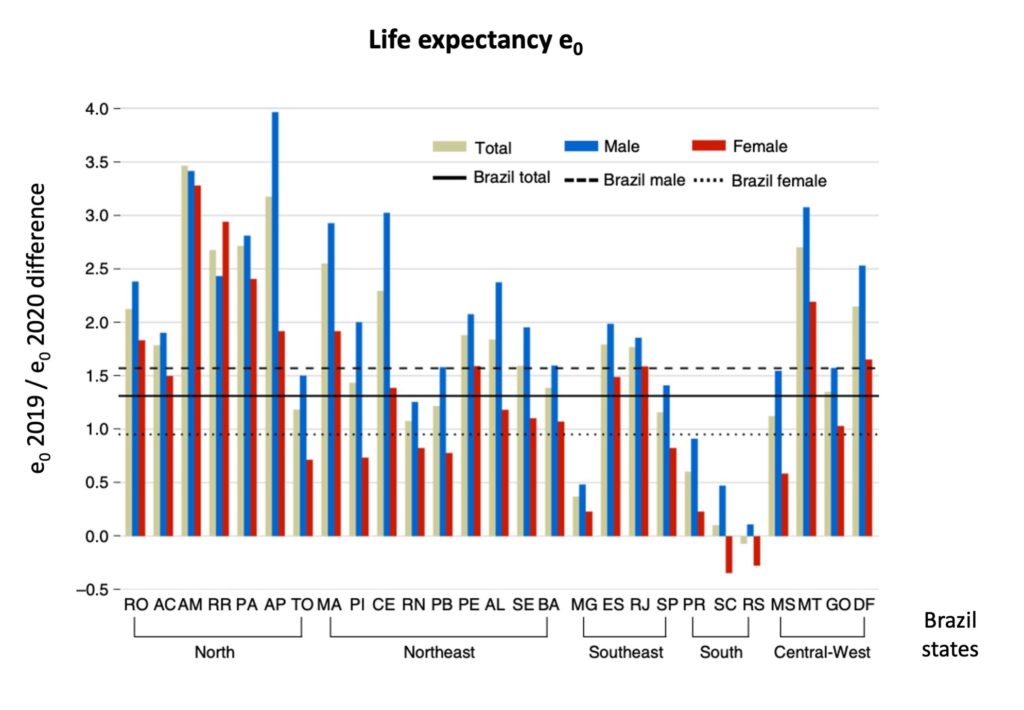 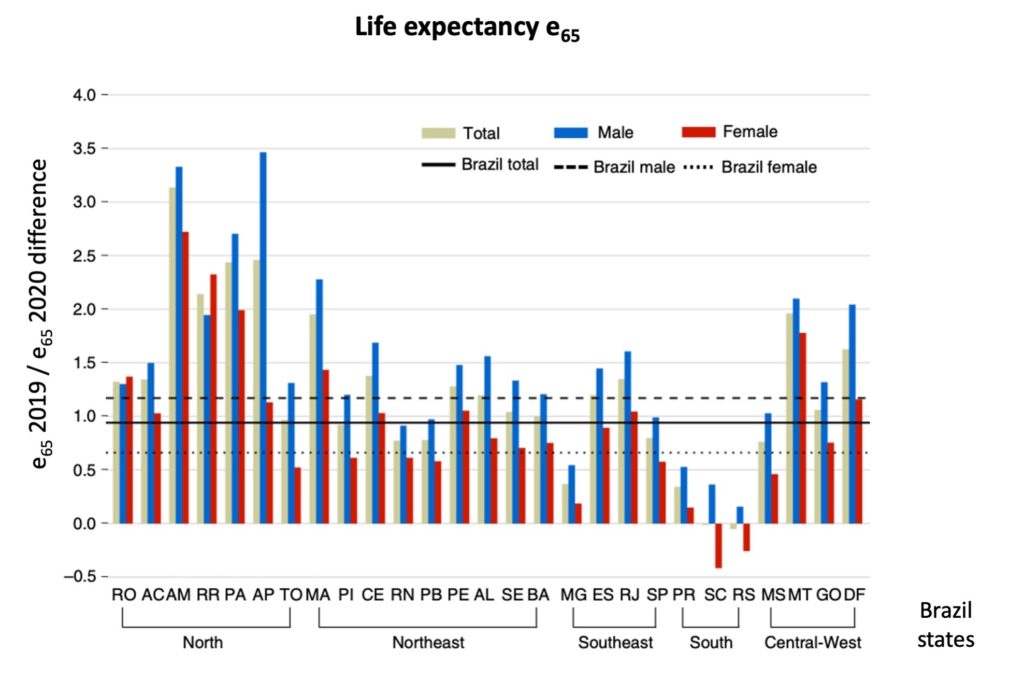 Overall, these 2 indicators show that the north of the country is more affected in terms of mortality than the south. The northern and north-eastern states suffer from greater inequalities, and health care access is more difficult. However, in the north-east, the reduction in life expectancy was less than in the north because governors in these states imposed more drastic social distancing measures, against the recommendations of the Brazilian President.

The researchers compared mortality figures between men and women and calculated a difference in life expectancy e0 of 0,6 years, on average, showing that men are more susceptible to COVID-19 than women. For the year 2021, the scientists estimated an average reduction in life expectancy e0 of 1,78 years, based on the first 4 months of the year. However, this figure is only an estimation and may be under-estimated. It cannot therefore be compared to the data from 2020.

Mortality in Brazil due to COVID-19 has been catastrophic. Vaccinations have proved to be effective in reducing numbers of deaths, but Brazil is still behind other countries. In addition, the COVID-19 epidemic has halted numerous care procedures in the country (a reduction of 35% in cancer diagnosis and the interruption of treatments against HIV or tuberculosis, for example). These factors may decrease life expectancy in Brazil still further in the coming years.