Could the Californian variant be dangerous?

Although SARS-CoV-2 mutates little in comparison to other RNA viruses, the relentless course of the COVID-19 pandemic and the fact of its high transmissibility means that the original Wuhan strain has already acquired a certain genetic diversity. This is shown in the regular discovery of new variants, modifying their transmission, their virulence and their capacities to evade immune responses, whether natural (following infection) or vaccinal. Amongst these variants, some have been monitored very closely, such as the UK, South African and Brazilian variants. In January 2021, a Californian variant was identified, notably carrying a new mutation, the L452R. Researchers in San Francisco (University of California San Francisco/ UCSF-Abbott Viral Diagnostics and Discovery Center) have recently described the propogation of this variant in California, its transmissibility and its capacity to escape neutralization by antibodies.

To do this, the researchers sequenced the viral genome of 2 172 patients from California between September 2020 and January 2021. They were thus able to observe that the variant had become the dominant strain in California, evolving from 0 at the beginning of September 2020 to more than 50% five months later. They were able to estimate that this variant had increased its transmissibility by about 20%. This may be explained by the fact that it enters cells easily, although the L452R mutation is not directly situated in the region of interaction with the ACE2 cellular receptor (unlike the N501Y mutation of the UK, South African and Brazilian variants). In addition, the viral charge in patients infected by this variant seems to be two times greater than that of other strains circulating during this period. The researchers carried out neutralization tests using serum (containing antibodies) from patients either convalescing or immunised with the Pfizer-BioNTech or Moderna vaccines. The Californian variant was neutralized seven times less effectively by the serum of convalescing patients and two times less by serum from vaccinated patients.

In conclusion, the Californian variant carrying the L452R mutation was able to become the dominant variant a mere few months after its appearance, due mainly to its high transmissibility. This variant seems to have moderate immune evasion from antibodies from vaccinated patients. It should continue to be monitored since it may be able to acquire supplementary mutations, which may increase still further its transmissibility or its capacity for immune escape. 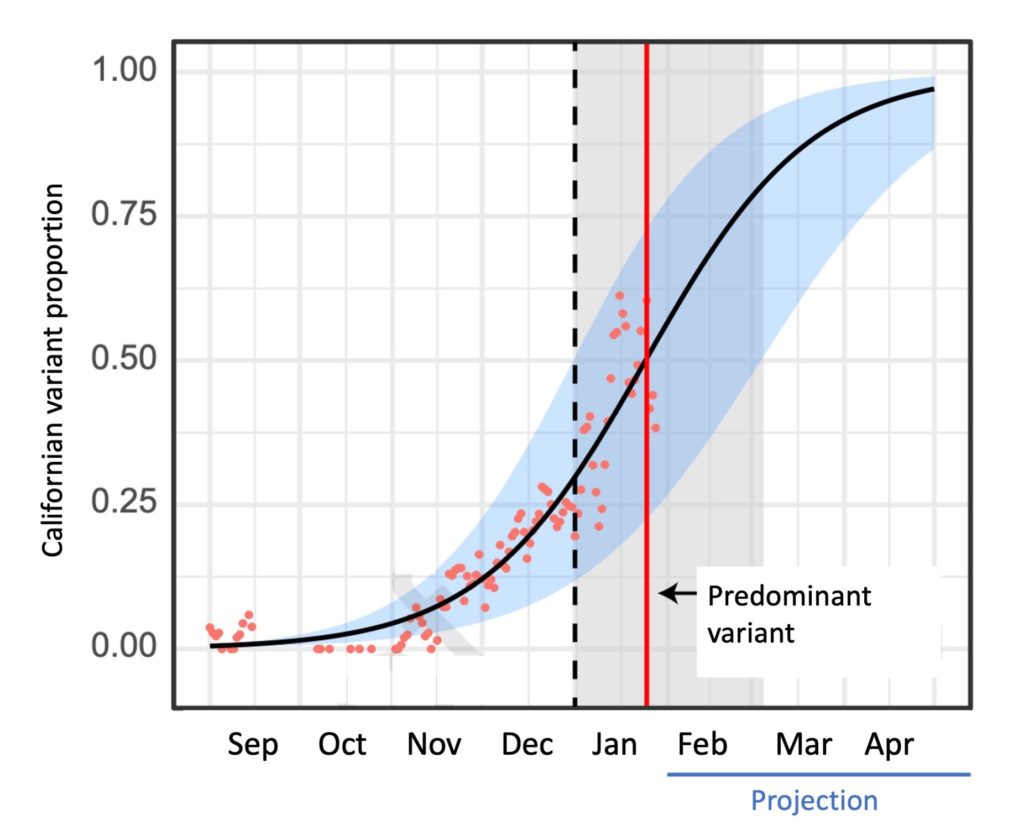