Challenges specific to the most advanced African countries

By March 2021, some African countries had suffered two waves of infection with a total of more than 2,9 million people affected and more than 74 000 deaths. As is the case in other parts of the world, the effects of the pandemic are extremely variable from one country to another. These variations may be due to intrinsic differences in the countries’ capacities to respond to the epidemic (differences that can be evaluated using several indexes linked to health infrastructures), to their capacities for testing, etc. But these variations may also be explained by local under-estimations.

To better understand the factors that weaken a country’s defences and to devise predictive tools, British and African scientists (at the Universities of Edinburgh, Nairobi, and Ghana, and the offices of the United Nations of Africa) carried out an observational study using COVID-19 mortality data in Africa as well as taking into account each country’s specificity. In this model, under-estimations of mortality were corrected.

It seems that during the 1st wave of July 2020, the proportion of the population living in an urban environment, the frequency of travel before the pandemic and the prevalence of AIDS (associated co-morbidities) were clear indicators of death rates per inhabitant. On the other hand, the timing or the rigour of governmental health measures had very little impact, including on the severity of the 2nd wave in January 2021. Mortality levels in the 1st wave were a clear indicator of what levels in the 2nd wave would be, since each country’s internal weaknesses, and therefore its risk factors, remained the same. The intrinsic characteristics of each country determined the evolution of the epidemic at a national level.

Somewhat counter-intuitively, poorer countries with lower resilience were not the most affected by mortality. More densely populated countries, with several international airports and with high levels of air traffic, were those where the first cases of COVID-19 appeared earlier, irrespective of their abilities to respond to the epidemic or to test widely. The more insular countries detected their first cases later.

This study therefore identifies predictive risk factors linked to mortality during the first two waves of COVID-19 in Africa. They are inversely dependent on socio-economic development levels since the countries that were the best equipped and prepared to respond were also the most vulnerable. The authors emphasise that surveillance and verification of deaths must be improved in Africa, and that efforts must be made to understand and correct risk factors so as to be better prepared for other viral outbreaks in the future. 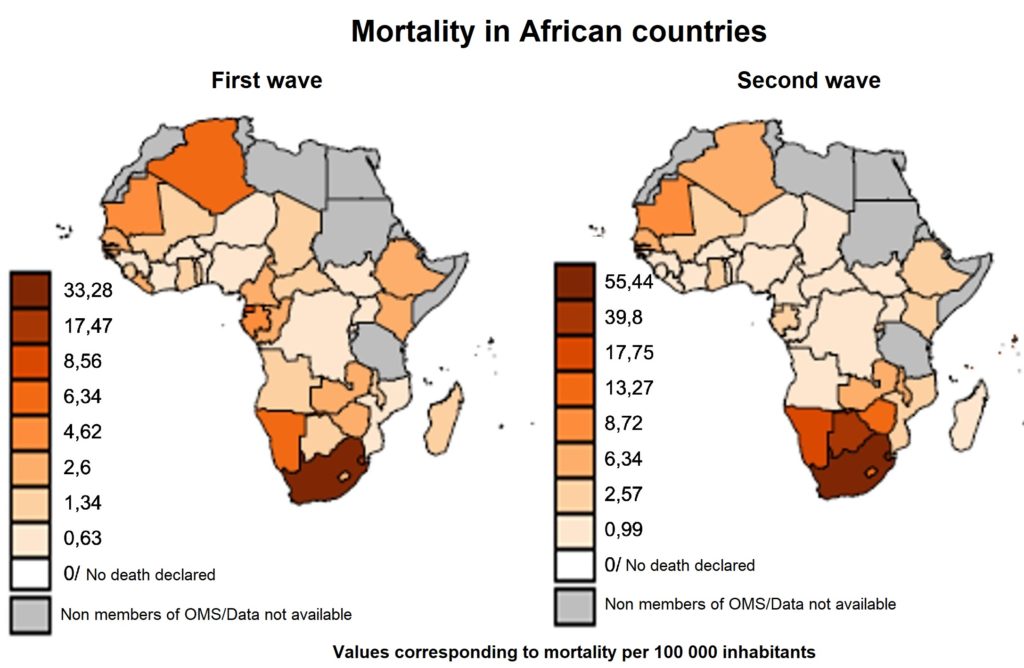