Are interferons an indicator of levels of severity?

Severe cases of COVID-19 are characterised by raised levels of pro-inflammatory cytokines in the blood circulation as well as by exacerbated inflammation. Interferons (IFN) are anti-viral cytokines which have been given particular attention. They are made up of 3 families: the IFN-I (⍺ and β), the IFN-II (ɣ) and the IFN-III (𝛌 1-4).  While we know that the overexpression of IFN-IIs is associated with severe illness and death, the role of the IFN-Is and -IIIs in the pathogenesis of COVID-19 is still poorly understood.

In order to improve understanding, researchers at the universities of San Raffaele (Milan, Italy) and Harvard (Cambridge, USA) evaluated the production of IFNs in 155 moderate and severely ill COVID-19 patients, as well as in 24 patients having non-infectious lung diseases (fibrosis, sarcoidosis, transplants) and in 28 healthy individuals. They quantified IFN mRNA expression in the upper respiratory tract (nasopharyngeal samples) and lower respiratory tract (bronchoalveolar fluids) and quantified the cytokines present.

What did they observe? We have to distinguish between the upper and lower respiratory passages.

In the upper respiratory passages, it appears that the expression profile of the various classes of IFN determines the severity of COVID-19. The patients who had the highest viral load in the upper passages were those who expressed the most IFN-IIIs. On the other hand, this correlation holds less well in older patients at greater risk. In addition, we understand that a high production of IFN-IIIs, but not of IFN-Is, protects patients from severe forms of COVID-19. In particular, the IFN-λ1s and IFN-λ3s are those that induce ISGs (Interferon Stimulated Genes, >50 tested) capable of providing an effective anti-SARS-CoV-2 response. However, the IFN-Is and IFN-λ2s seem to be linked more to critical cases, where the ISG protectors are poorly expressed.

What about the lower respiratory passages? The IFN-Is and IFN-IIIs are over-expressed here. In severe and critically ill patients, the levels of IFN (except for IFN-λ1)  are higher than in the upper passages, but the same classes of IFN are expressed in the entire respiratory tract, which is considered to be a “signature” of severity. In the lower passages of critically ill patients, the “protector” ISGs are clearly under-expressed.

If we now analyse these profiles at the protein level, compared to patients with other acute respiratory syndromes or lung diseases, COVID-19 patients have very specific IFNs, considered to be a “signature” of COVID-19: raised levels of IFN-IIIs (especially IFN-λ2 and 3) and IFN-Is. Following infection by SARS- CoV-2, the IFN-λ1s tend to be produced by the epithelial cells through activation of the RIG-I/MDA-5 or TLR3 pathway. The IFN-IIIs are produced by the dendritic cells uniquely through the TLR3 pathway, although these do not respond directly to the viral infection but rather to the viral RNA secreted by neighbouring infected cells.

The IFNs therefore have opposing roles along the respiratory tract and the expression levels of each at specific sites determine the clinical outcome of COVID-19. An efficient production of IFNs in the upper passageways allows control of the infection and therefore limits propagation of the virus in the lower passages. When this is not the case, the production of IFNs in the lungs contributes to a “cytokinetic storm”, causing damage to the tissues (apoptosis). This work suggests that treatments based on IFN-IIIs could be effective if they are administered very early in the upper respiratory tract, but not systemically. 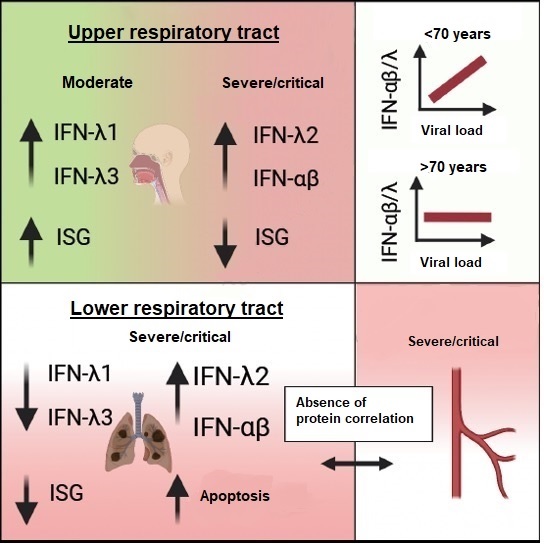 Benedetta Sposito and coll. The interferon landscape along the respiratory tract impacts the severity of COVID-19. Cell, 2021 Aug 19.