Analysis of the 3rd wave of the epidemic in England

Massive vaccination campaigns began at the end of 2020. They enabled numbers of people affected by severe forms of COVID-19 to be reduced. But during the summer, the Delta (Indian) variant emerged, more transmissible than the Alpha (UK) variant, and became dominant. At that time, only a small proportion of the populations of developed countries had received 2 doses of the vaccine, and only 1% of populations in developing countries had received even one injection. The number of cases of and deaths from COVID-19 therefore continued to rise slowly during the summer of 2021 in the northern hemisphere. This was followed by a strong wave of infections during the autumn in numerous countries.

In England, a large-scale study was initiated at the beginning of the pandemic, in May 2020, with the aim of following its long-term development. Researchers from London Imperial College present their results every 2 months: period 12 was from mid-May to mid-June 2021, and period 13 from mid-June to mid-July 2021.

The researchers have gathered data from self-testing by about 100 000 individuals aged 5 and over, chosen randomly every month, in order to arrive at a representative sample of the population. They have also used socio-demographic information and details of people’s vaccination histories.

The researchers firstly observed a significant increase in numbers of cases in these latter periods. In period 12, 0,15% of the overall population was infected, and this increased to 0,63% in period 13, similar to levels in October 2020 and January 2021, the beginning and the end of the 2nd wave in the country. The number of people infected during period 12 doubled in 25 days, whereas it doubled in only 11 days in period 13. The rate of propagation had therefore increased during these periods. The Delta variant rapidly became dominant in the English population, replacing the Alpha variant. 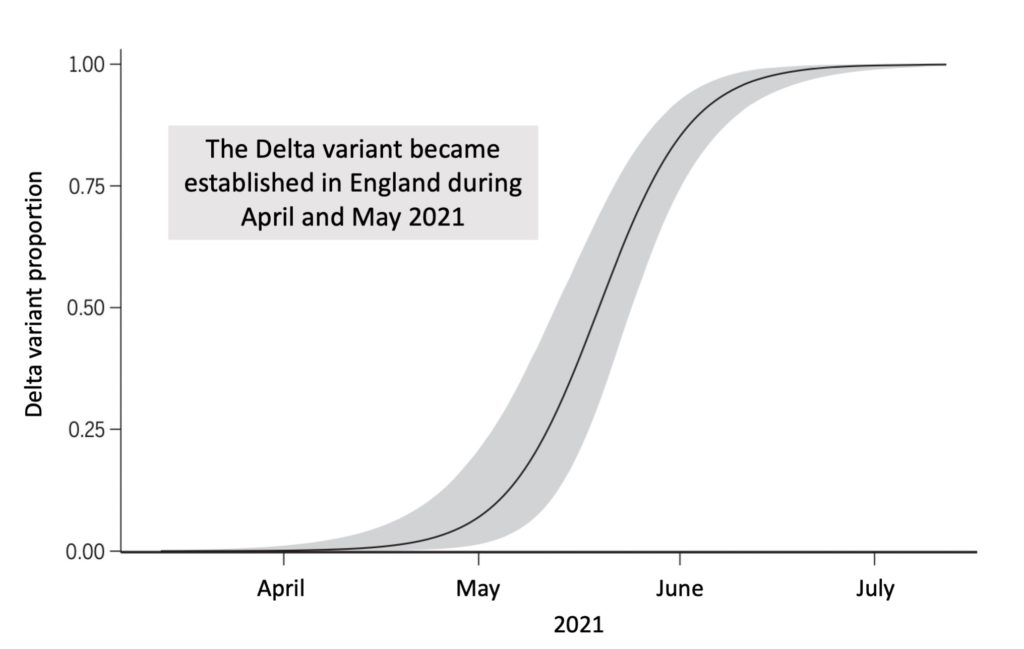 In the viruses sequenced during period 12, around 80% were the Delta variant, whereas in period 13, 100% of the virus in circulation was Delta. There was one other important piece of information: the age of those infected seemed to decrease over periods 12 and 13, so that there were 9 times more young people aged between 13 and 17 infected in period 13 than in period 12. Yet despite these figures, which clearly show a worsening of the health situation during this period, England is one of the countries with the highest rates of adult vaccination. It should be noted, perhaps as  a partial explanation, that from April-May 2021, the British government progressively relaxed public health restrictions and precautions, before abandoning them completely on the 19th of July2021. The scientists were able to show in this study, however, that vaccinated individuals had much less risk of being infected by COVID-19 than the non-vaccinated. However, risk of infection for vaccinated people exists, and even seems to have increased: 29% of people infected in period 12 were vaccinated, against 44% in period 13. However, it is clear that mortality rates decreased in comparison with the 1st and 2nd waves, indicating the benefits of vaccination.

The arrival of autumn and the closer physical contact of people, in addition to the high transmissibility of the Delta variant, generated the epidemic wave which occurred at the end of the year 2021.