An antibody with the potential to combat COVID-19?

The symptoms of COVID-19 are as varied as they are dangerous: severe breathing difficulties, inflammation and multiple organ failure are some of those that merit particular attention. In order to better understand the illness it’s important to study the immune system and in particular the antibodies it produces. It is these antibodies, that is, the proteins produced by active B cells (called plasma cells), that recognize pathogenic agents during infection, and attempt to fight them.COVID-19 patients’ antibodies seem to be a promising area of study to help us better understand the mechanisms inherent in the development of the disease.

The angiotensin-converting enzyme II (ACE2) is a protein expressed by diverse cells in the human body, notably in the kidneys, the heart and the digestive tract. It plays an important role in maintaining healthy blood pressure. But it is also the principal receptor by which SARS-CoV-2 enters into cells with the help of a viral protein called S1, which recognises and integrates with the ACE2. Having managed to enter the system, the virus can begin its replication cycle.

Several studies have shown the presence of antibodies specific to the receptor-binding domain (RBD) of the S1 protein, which stop SARS-CoV-2 attaching itself to the ACE2 and thereby prevent replication.

The protocol for this study, at least in its first phase, can be shown diagrammatically thus:

However, these antibodies generally have few mutations, and this can lead to reversals: these antibodies can also attack the healthy body. Indeed, it is these mutations (or genetic recombinations) that are at the origin of those changes to the antibody-binding sites which give them their specificity. Without this, the antibodies are not precise enough and risk attacking too many false targets.

Study of these anti-RBD antibodies could potentially be a huge help in the fight against the pandemic. In order to select the best candidates, researchers sequenced 598 anti-bodies from 10 infected patients and then  fine-tuned the results on the basis of several criteria:

Taking these criteria into account, the 18 antibodies having the greatest success in recognising the virus envelope were examined. However, 4 of these antibodies also attack healthy human tissue in the brain, the smooth muscles of the lungs, the heart, the kidneys and the colon, making them poor allies in the fight against SARS-CoV-2.

In the list of the 14 remaining antibodies, CV07-209 was chosen as it had the strongest neutralising effect in vitro along with the weakest concentration. In order to test its prophylactic and therapeutic effects in vivo, an infection model was set up using SARS-CoV-2 on hamsters. In the “prophylactic” group, CV07-209 was administered with a concentration of 18 mg/kg 24 hours before infection, while in the “therapeutic” group, it was administered in the same dosage 2 hours before infection. There was also a control group injected with an antibody not specifically envisaged for use against SARS-CoV-2. The evolution of the infection was gauged by the hamsters’ weight loss as well as by measuring viral particles after sacrifice.

This second phase of the research programme can be represented thus: 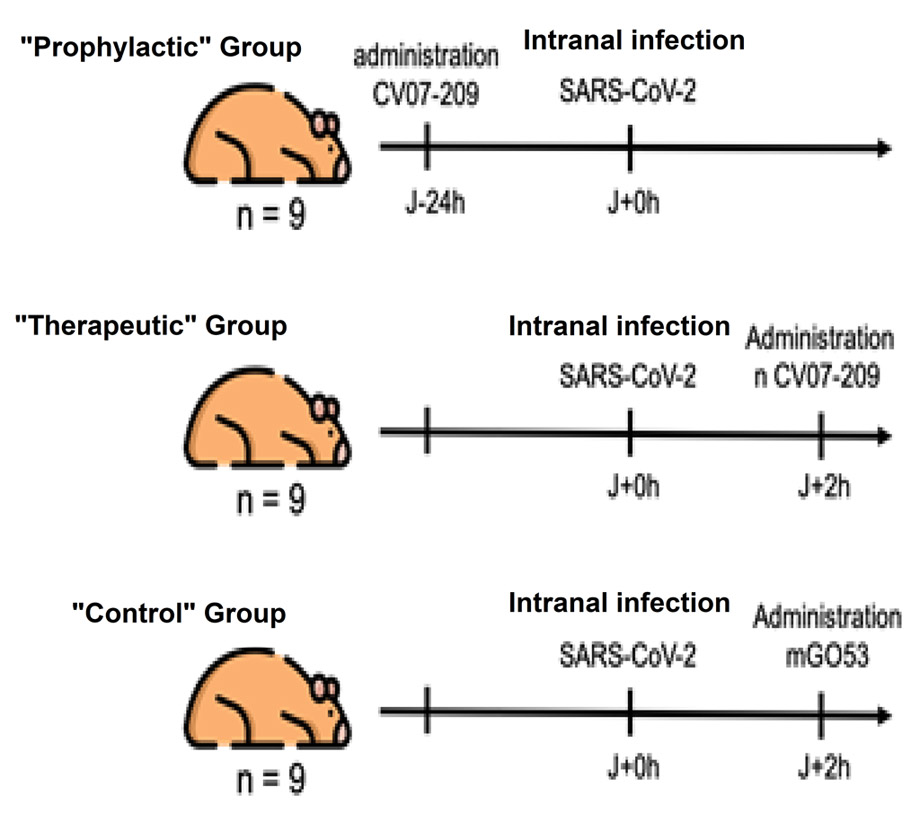 After infection, the control group had lost weight, indicating that the illness was progressing, whereas the prophylactic and therapeutic groups had put on weight. 3 or 5 days after infection, no viral particles could be detected in the lungs of the two groups, and about 99,99% of the virus had been eliminated, which was not the case in the control group. These results were confirmed physiologically by the non-development of respiratory pathologies in the prophylactic and therapeutic groups in comparison with the control group.

However, using samples taking from the nose and larynx, it was possible to show the same levels of viral genomic RNA in the two groups, suggesting that the CV07-209 antibody protects only the lungs and not the upper respiratory tract.

The use of a specific antibody for the RBD of the S1 protein may therefore provide interesting perspectives in prophylactic or therapeutic treatments against SARS-CoV-2.