The first cases of COVID in Wuhan

What do we know of the origins of the COVID-19 pandemic in Wuhan? It has been established that certain animals (pangolins, racoon dogs, bats) carry strains very close to SARS-CoV-2. Racoon dogs were sold in Huanan market as well as 3 other live-animal markets in Wuhan (with 11 million inhabitants). Probably through successive infections, this contact facilitated transmission to humans since these same animals had already been responsible for the 1st epidemic of SARS-CoV-1. However, it is impossible to determine the exact origin of SARS-CoV-2 since none of the animals sold was subject to virological investigation, and because the market was closed and disinfected on the 1st of January 2020. Samples taken from the first COVID-19 patients were sequenced, and two strains (A and B) of SARS-CoV-2 were identified. It is not known whether these two lineages had common or distinct origins.

The Hubei Provincial Hospital of Integrated Chinese and Western Medicine (HPHICWM) was the first to alert authorities to cases of a mysterious form of influenza on the 29th of December 2019 (national authorities were informed on the 30th) and to make the link with Huanan market. On the 26th of December 2019, an elderly couple and their son were found to have significant lung damage. The woman had had symptoms since the 15th of December. According to the World Heath Organisation, this family formed cluster n°1, which could have been at the origin of the A lineage. However, the woman had not visited Huanan market. Between the 27th and the 29th of December 2019, four workers from the market were admitted with the same symptoms. At the other local hospitals (Tongji, Union and Zongnan), there were a total of 41 cases of unexplained pneumonia on December 30, 2019. These patients were transferred to the Jinyintan hospital in Wuhan, the main centre for infectious diseases. Deficiencies in the Viral Pneumonia of Unknown Etiology (VPUE) system, which allows clinicians to provide early warning of viral pneumonia of unknown origin, may have delayed and even under-reported these new cases to authorities.

Retrospective studies later revealed more cases. It seems that the first clear-cut case of COVID-19 was in a sales assistant from the Huanan fish market, who had made known her symptoms on the 11th of December 2019. On the 18th of December, the central hospital in Wuhan had admitted a patient aged 65, who had been ill since the 13th of December 2019, and who was a courier on Huanan market. But the presence of a new human coronavirus was confirmed only on the 27th of December 2019, because genomic sequencing is outsourced. Other new cases were then found, confirming that the epidemic had begun previously.

Amongst these early cases which, whether retrospective or not, represented in total more than 200 people, between 1/3 and 2/3 of individuals did not have a direct connection with Huanan market, but all lived nearby. It is very likely that asymptomatic cases linked to the market were not spotted, but led to other people being infected, since only 7% of people required hospitalisation at that time.

In order to prepare for future viral outbreaks, it is therefore crucial to continue to improve health networks so as to be able to analyse samples, and instigate epidemiological research and clinical reporting as soon as possible. 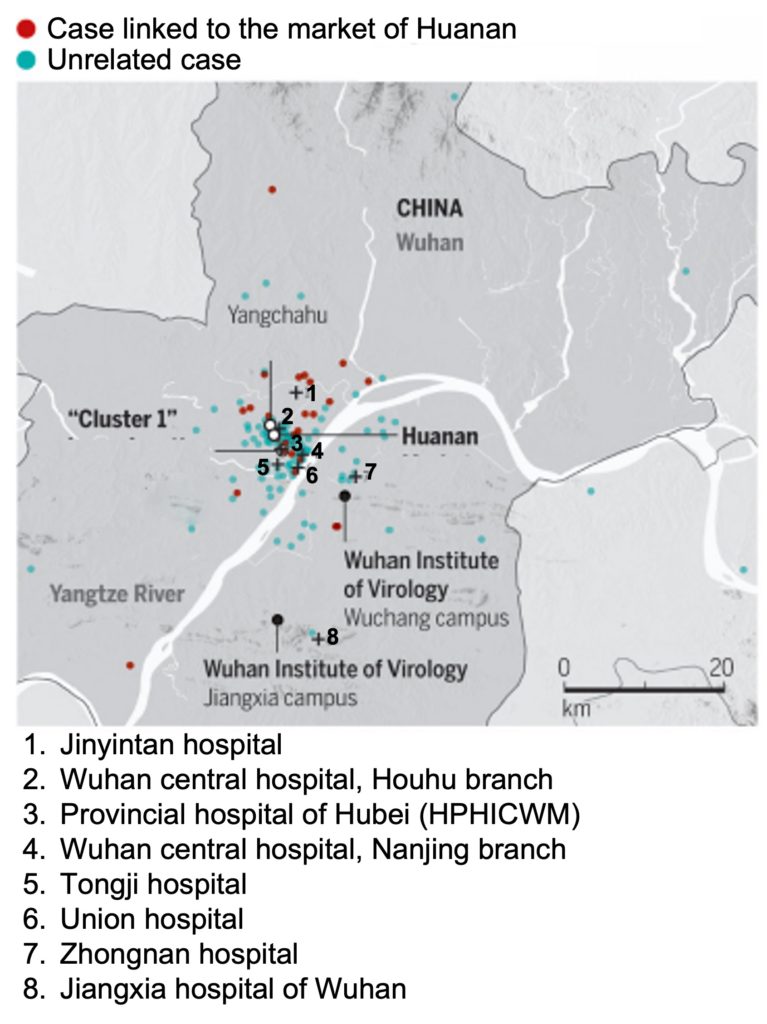