A global study of the infected cell

In order to fight the COVID-19 pandemic successfully, we need to better understand the interaction between SARS-CoV-2 and the host cell. This requires us to know how each viral protein functions, but also how they interact with cellular proteins. “Omics” studies is a systematic approach allowing understanding of the functioning of life in general, and at a molecular level. It has become essential to the development of personalised medicine.

A team of German researchers at the University of Munich carried out a complete “multi-omic” study on human lung carcinoma cells (laboratory cancer cells) infected with SARS-CoV-2 or SARS-CoV. To understand the role and interactions of each viral protein, they were differentiated, introduced into the cells, and purified and analyzed by mass spectrometry. The effects of the concerted action of the viral proteins in the host were evaluated in the same cells, infected with both viruses, and the overall expression of mRNAs, proteins and their post-translational changes (TPMs) was analyzed over time. Integrating all these approaches provides a complete and unique understanding of virus-host interactions. For example, if one particular protein is no longer expressed after viral infection, we will know if the virus has disrupted the transcription or if it has induced its ubiquitination to be degraded by autophagy. We can also identify the viral protein responsible. If an entire signalling path is disturbed, redundancies will be observed to support the result. To validate their approach and test the points of vulnerability thus identified, the researchers evaluated the effects of 48 specific known drugs in vitro.

What were their observations? The two viruses deregulate numerous cellular processes at different levels (transcription, MPT, viral/cellular protein interaction). Some deregulation is common to both viruses: they both inhibit the interferon response (IFNa/b) at the transcriptional level, activate other pro-inflammatory signatures, deregulate mechanisms associated with epithelial barrier integrity (EDF1) and alter mitochondrial functions and their degradation. However, their many differences may explain the higher levels of pathogenicity of SARS-CoV, which activates the NF-kB response much more strongly. SARS-CoV-2 targets in particular the innate immune response (the M, ORF3 and 7b viral proteins regulate the MAVS and TNF-b pathways), the adaptive response (ORF8 regulates the TGF-b pathway), cellular stress (HSPA1A), repairing of the DNA (ATM/ATR), intercellular metabolism, cholesterol metabolism, autophagy (ORF3 and NSP6 regulate the DEPTOR/RICTOR pathway) and the viral entry (ACE2, RAB7A). The MAPK pathway (survival, growth) is very strongly deregulated by phosphorylation after infection.

In addition, the inhibitors of the B-RAF (Sorafenib), JAK1/2 (Baricitinib), or MAPK (SB239063) pathways significantly increase viral replication. However, this is blocked if DNA damage is caused (Tirapazamine) or if there is mTOR inhibition (Rapamycin). The metalloprotease inhibitors (Prinomastat) block only replication of SARS-CoV-2 since their activity is related to the TGF-b pathway. The most pronounced antiviral effects are seen by inhibiting the FLT3/AXL pathway (Gilteritinib, effective against both strains), AKT (Ipatasertib) and metalloproteases (Prinomastat, Marimastat). Some results reflect clinical observations and verified data from scientific literature: when autophagy is inhibited, APOB accumulates in cells, which is known to promote thrombosis. In severe COVID-19 cases, fibrosis and pulmonary edema are associated with deregulation of the TGF-b pathway.

This catalogue of systematic data enhances our knowledge and understanding of those molecular mechanisms that control the coronavirus cycle. It highlights the differences between pathogens of different strains. The authors hope that their work will be used by the scientific community to identify new antivirals and help to combat SARS-CoV-2 from different angles (signalisation pathways) by using combination therapies.

Effects of specific drugs on virus multiplication and cell viability: 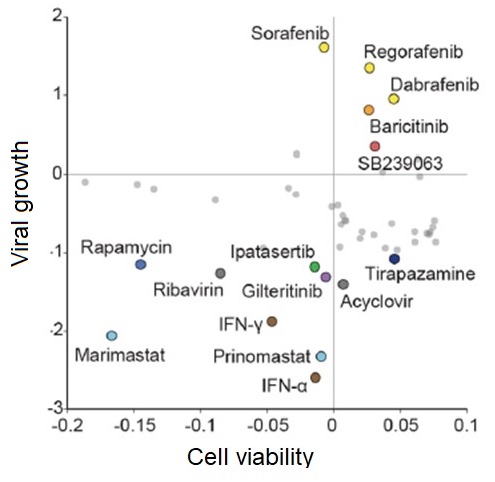