The COVID-19 pandemic has tragically revealed that we lack medicines against respiratory viral infections. Remdesivir is the only molecule to have been approved, but can only be administered intravenously. This limits its use to hospitalised patients and in general it is therefore given too late. Ideally, we need to have molecules that are effective against several viruses that can be administered orally at the beginning of infection.

With this in mind, American researchers at the University of Atlanta have chosen an alternative virus-model to that of SARS-CoV-2, the Respiratory Syncytial Virus (RSV). It is responsible for numerous hospitalisations each year, and there is no treatment for it either. The researchers explored the efficacy of several molecules close to Molnupiravir which had already demonstrated some effectiveness against flu and betacoronaviruses. In doing so they hoped to find molecules with a different action mechanism.

From the earliest tests, the best candidate proved to be 4’-fluorouridine (4’-FLU, EIDD-2749). They demonstrated its efficacy against several strains of RSV (clinical isolates) where it inhibits infection in vitro. In strong doses, the molecule is not toxic to several human or animal cell lines. On primary respiratory epithelial cells (from donors), it is even 17 times more effective. Its incorporation, stability and antiviral activity are very convincing (RSV and SARS-CoV-2) in a reconstituted respiratory epithelium model (3D organoids). This inhibitor appears to be effective against several other viruses: Sendai, Rabies, Mumps, Vesicular Stomatitis, Paramyxovirus, and SARS-CoV-2.

The researchers established that the action mechanism of 4′-FLU is a competitive inhibition of RSV and SARS-CoV-2 polymerases (RNA Dependent RNA Polymerase, RdRp). In its triphosphate form, it mimics uridine triphosphates (UTP), one of the precursor nucleotides required for RNA synthesis, resulting in premature termination of RNA synthesis by RdRp. It is slightly less effective on SARS-CoV-2 than on RSV.

The researchers then infected mice with RSV, then administered 4’-FLU orally two hours later. With a daily dose of 5 mg/kg, this drug reduces the viral load in the lungs almost 100-fold, reduces pneumonias and does not affect levels of platelets or blood lymphocytes. The therapeutic window can extend up to 24 hours post-infection. In ferrets infected with SARS-CoV-2, 4’-FLU reduced the viral load 1 000-fold in the nasal passages. Efficacy was similar between Alpha, Gamma, Delta variants and reference strains. Three days after infection, the treated animals no longer secreted infectious viruses.

4’-FLU is a nucleotide analogue capable of inhibiting replication of several RNA viruses, including SARS-CoV-2. It has good pharmacokinetics after oral administration, a useful therapeutic window and good efficacy against different variants of SARS-CoV-2. It seems to be promising as an alternative treatment to Remdesivir, the efficacy of which is currently under scrutiny. 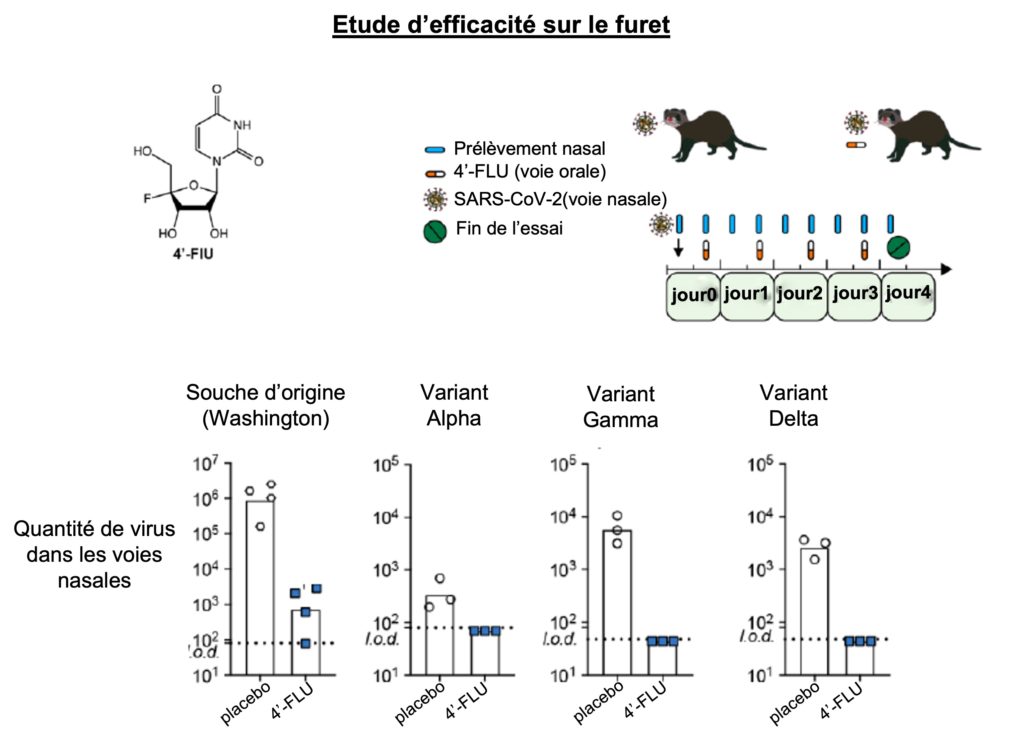