The efficacy of Moderna after 6 months

For several months, the emergence of new SARS-CoV-2 variants has been closely monitored since these new strains may be more virulent, and may evade immunity, even when it derives from vaccination. This is notably the case with the Alpha (⍺) (UK), Beta (β) (South African), Gamma (ɣ) (Brazilian), Epsilon (ε) (Californian), Delta (δ) (Indian) and Iota (Ɩ) (NewYork) variants. The majority of studies have evaluated the vaccine response against variants only in the short-term and have shown that their effectiveness is in general reduced, particularly against the Alpha, Beta and Delta variants. American researchers from the NIH (Vaccine Research Center, National Institute of Allergy and Infectious Diseases, National Institute of Health, Bethesda) have measured responses of the Moderna mRNA vaccine against these different variants for up to 6 months after the second dose of the vaccine.

The researchers tested serum (which contains antibodies) from various individuals vaccinated with Moderna: 8 people from each age group (18-55, 55-70  and over 71) at 4 different times (1 month after the 1st dose and 2 weeks, 3 months and 6 months after the 2nd dose). They firstly measured the neutralization of viral particles in vitro. After the 1st dose, all variants were neutralised, but at a low level. Neutralisation was found to be strongest 2 weeks after the 1st dose and then declined over 6 months.

The researchers then analysed the impact of different mutations. The E484K mutation, present in the Beta and Gamma variants, was found to significantly diminish neutralisation of the virus.

Finally, they compared results from the different age groups. Neutralisation levels were found to be lowest in the oldest individuals, but the effects of age were only slight in the majority of tests.

The Moderna vaccine therefore enables neutralisation of the virus by antibodies for up to 6 months after the 2nd dose, even though this neutralisation activity is reduced where variants are concerned. This data is important for scientists to be able to decide whether a 3rd dose of the vaccine will be needed, or if an update of the vaccine is required. 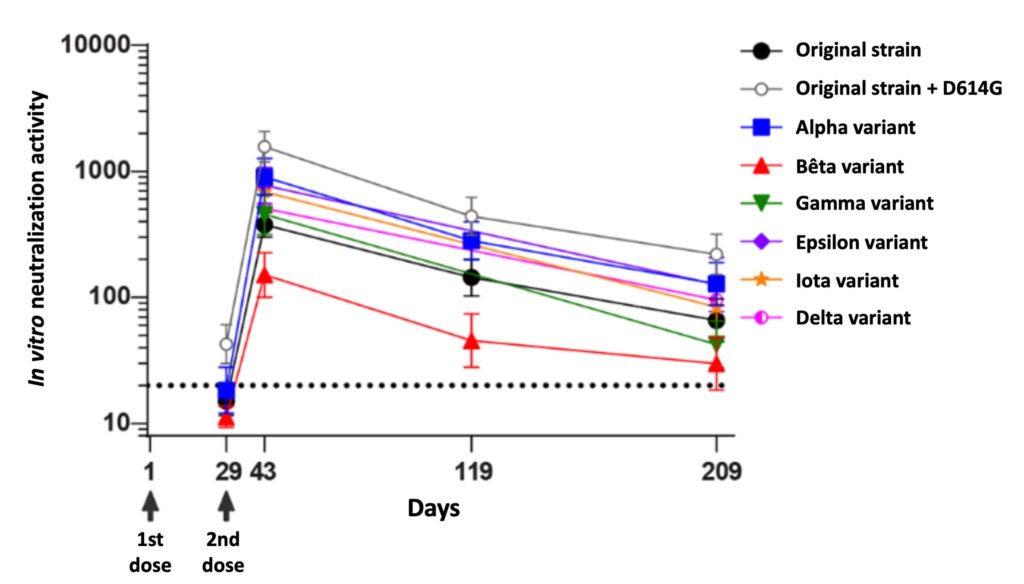