Contagious illnesses influence the social behaviour of individuals, which in turn alters the pathogen’s spreading patterns and the future outcome of the epidemic. We talk of coevolution. The notion of social distancing has become familiar to us since the beginning of the COVID-19 epidemic and its implementation does effectively reduce the virus’ spreading. Despite this fact, many people, including some researchers, question its usefulness. However, we can see that across the natural world many species have developed similar strategies in the face of infections.

Natural selection favours individuals able to detect the presence of a pathogen (or an infected individual) in order to avoid it and so not be contaminated. This requires the observation of various signals emanating from infected animals or humans which are often linked to inflammation. For example, when termites are infected by certain fungi, a vibratory alarm is triggered so that the infected insect is avoided by other termites (in combination with other hygiene measures). This change in behaviour starts just 15 minutes after exposure to infection, even before the spores are able to penetrate the shell, and before the insect becomes contagious.  With regard to olfactory responses, stimulation of the immune system causes specific odours in feces (mandrills, mice) or off-putting body smells (humans). Humans are often able to simply see if someone is ill by looking at his face (other mechanisms exist). There can be auditory factors at play also: infections reduce the frequency of vampire bats’ calls or cause audible respiratory changes in humans. Behaviour related to illness (lethargy for example) is widespread across species and easy to detect by others in the group (mice, humans). But the effectiveness of these defence mechanisms decreases when infections are asymptomatic.

The detection of these signals brings many changes in social behaviour in communities. Social distancing as we know it can be seen in healthy black ants who keep away from each other when one becomes infected. Self-isolating is another widespread feature of behaviour. It may be linked to the illness (what we call “social disinterest”) and show itself by, for example, a reduction in grooming (in vampire bats, for example) or in food sharing (notably in bee populations). Self-isolating can also be “altruistic”: this is the case in ants infected by certain fungi who stay by themselves outside the nest, or badgers with TB who leave the group to die alone. Another widespread form of behaviour is the active avoidance of infected individuals (humans, mandrills, guppies, lobsters, termites). The exclusion of ill members of the community may be enforced, notably by insects: infected bees are literally thrown out of the hive and ants destroy infected broods.

These changes in social behaviour adversely affect some of the benefits of life in a community, such as protection against predators, cooperation in searching for food, or the exchange of information. As with humans, there is the question of what is the best benefit/risk ratio for the colony , and this depends on its size, its social structure, the social statute of the individual insect /animal concerned, and the contagiousness and virulence of the pathogen. So infected ants that voluntarily self-isolate lose their ability to forage (they stop looking for food) but in so doing save numerous congeners within the colony. However a grey wolf infected by scabies is not excluded from the group: since the pack is small, they are more dependent on each other.

Social distancing may be breached to help sick individuals. Those who care for others are, of course, highly exposed to risk and may become “super spreaders” (this is why hospital staff are currently prioritized for vaccination). This altruistic behaviour is limited to humans and to certain insect insect societies that regularly elimininate fungal spores to prevent their congeners from becoming infected (termites, ants).

The virus itself reacts to social distancing, which forces it to find strategies that optimize spreading. In particular, viruses need to increase their capacities for transmission and replication (viral fitness), reduce virulence (asymptomatic transmission), develop their capacities to infect before symptoms appear, or conceal their presence. An isolated individual who is dying will be less effective at transmitting the pathogen. Certain viruses block the production of pro-inflammatory cytokines, while others increase the production of anti-inflammatory cytokines, which reduces inflammation, and thereby lethargy and self-isolation. Parasites within the nervous system may also modify behaviour, increasing for example, aggression, the libido, or the parental behaviour of the host so as to heighten social interaction (mice, rats, cats). Finally, certain pathogens make bees more tolerant so that they accept new members into the hive.

Since insects living in societies share many characteristics with humans, they demonstrate to us how much social distancing, self-isolating, preventative hygiene measures and care given to individual ill members are helpful for public health in the case of an epidemic. In humans, dependence on social relations is less strong and behaviour patterns are less synchronized, which produces conflicts of interest and egotistical forms of behaviour. 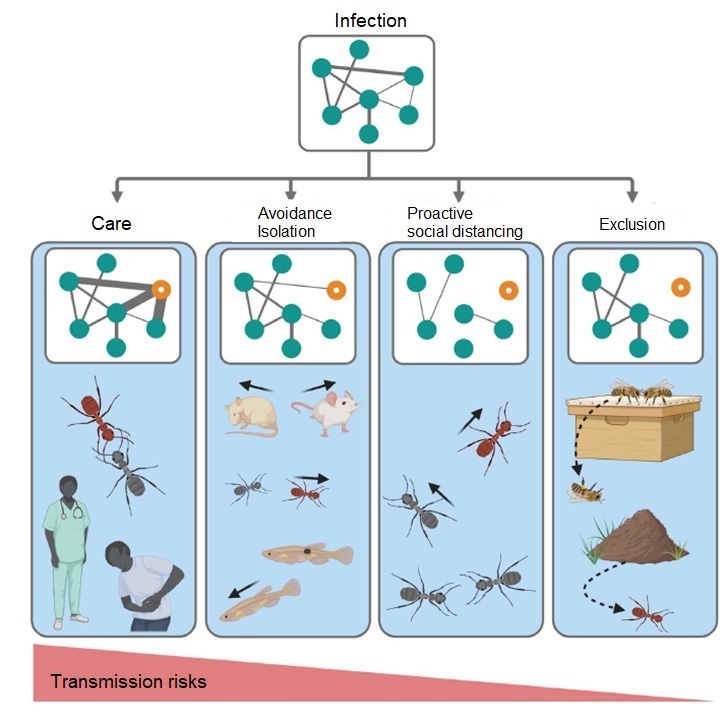 These behavioural studies are mainly carried out through administration of immunostimulants to their subjects, but real-life studies of co-evolution between hosts and pathogens are much rarer. However, such studies could allow us to better understand the effects of social distancing and its duration on pathogen evolution, which in turn could help us to predict and alter the outcome of epidemics.