How humoral and cellular immunities fight the virus

Recent studies carried out in rhesus macaques have shown that a natural infection as well as several candidate vaccines could effectively protect against reinfection by SARS-CoV-2. This protection is correlated, inter alia, with levels of “neutralizing” antibodies that stop the virus interacting with its target cell. But specific immunity is made up of the humoral response (the production of antibodies) and the cellular response (which destroys infected cells without antibodies being involved). We don’t know a lot about their relative importance in protection against SARS-CoV-2.

In a recent study, American researchers (MIT, Harvard, MGH) built up concentrated stocks of antibodies (principally IgG) specific to the virus, from blood samples taken from 9 convalescing rhesus macaques that were mixed then purified, having already been infected twice  with SARS-CoV-2 and therefore protected.

Firstly, these IgG were administered intravenously to 12 macaques that had never been infected with the virus, that were then split into 4 groups. 3 groups received respectively increased doses of antibodies (2,5 mg/kg, 25 mg/kg, 250 mg/kg), and a control group received antibodies non-specific to the virus (placebo). Three days later, all the macaques were infected with SARS-CoV-2, and the active replication of the virus in the respiratory passages was measured each day (detection of subgenomic viral RNA by RT-PCR).

What were the results ? The control group showed signs of viral replication from the beginning, over a period of 14 days; the group having received the weakest dose of IgGs (2,5 mg/kg) showed less elevated levels of replication, and over a shorter period; while the other groups that had received stronger doses of IgG (25 mg/kg and 250 mg/kg) showed no signs of replication. This shows that the action of antibodies from convalescing macaques may be enough in itself to protect the others, even in small doses. During this lapse of time (0 – 4 days) the cellular response did not have time to start acting.

In the second part of the study, six macaques were infected with SARS-CoV-2 then received IgGs intravenously the following day. They were split into 3 groups: the first two received increasing doses (25 and 250 mg/kg) whereas the third group received nothing. Viral replication was then measured over 10 days. Compared to the control group, only the group having received the larger dose (250 mg/kg) saw a clear fall in viral replication, showing that with a dose of less than 25 mg/kg, this passive therapeutic strategy does not work.

Finally, 13 other macaques were infected with SARS-CoV-2. Naturally, the level of IgG neutralizers (measured by neutralization tests in vitro  on infected cells) declined from the 4th week following infection. During week 7, when their levels were low, the T-CD8+ cellular immune response had disappeared in 8 macaques (anti-CD8+ antibody depletion), but not in the 5 others. Three days later, the 13 macaques were reinfected then viral replication was measured during the following days. This time, the control group was protected by its natural immunity, whereas all the macaques without CD8+ cells showed signs of viral replication. When levels of neutralizing antibodies were low, cellular immunity took on a critical role in the protection of the macaques.

We can represent these experiences as follows: 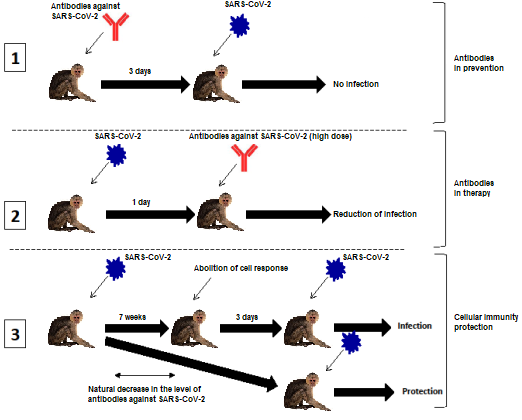 This research indicates that the humoral response gives efficient protection against SARS-CoV-2 reinfection, but that when levels of antibodies decreases over time, cellular immunity is capable of taking over to control reinfection. Therapies using passive immunity (transfer of antibodies) could be effective above certain dosages. On the other hand, protective doses used here are higher than those found in convalescing humans, which leads us to think that the transfer of plasma (the liquid part of blood free of cells and platelets) could be a therapeutic strategy (although with limited effect). In order to answer these questions, other clinical studies are currently taking place. This research also suggests that for a vaccine to be effective, it must prompt humoral responses but also robust and durable cellular responses.